There's a saying that goes, "If you want to make God laugh, tell Him your plans." On a recent Friday, my plan was to have my Champions for Kids Party / Food Drive at my job. Instead, unfortunately, the employees in my organization were mourning the loss of the jobs of some of our co-workers.The downward economy has taken a toll on the non-profit organization that I work for. In addition to the people that were laid off last week, additional layoffs are upcoming. It's devastating.

These are the people who, when I talked them about how Ayva and I went shopping for cereal, and explained to them about the concept of "Buy 2, Give 1" and asked them to bring cereal and other foods to donate to Philabundance, were more than willing to give. They were excited and eager. Some colleagues who knew they wouldn't be in the office for the drive still brought items to donate ahead of time. One of my co-workers created a lesson to introduce our campers who are studying the Olympics to the importance of eating healthy in order to be champions. 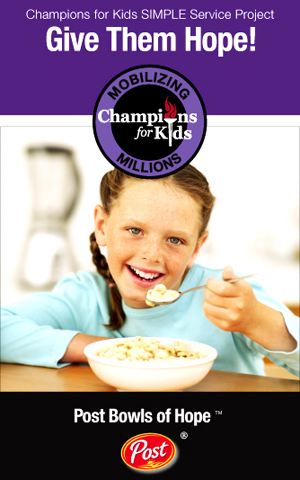 The beauty of my colleagues is that they don’t stay down for long. As long as there are still children going to bed hungry at night, we are still going to be champions against child hunger. So, the plan has changed. We didn’t have our party that Friday, but it doesn’t mean that we weren’t still going to give. Folks brought in cereal to donate all week long, and I dropped it off at Philabundance at the end of the week. Throughout the week, I’ll still did random giveaways to the food drive supporters.

You know, when you are going through a rough spot, giving to others provides a great opportunity to reflect on the fact that you have the ability to give. Whether you’re giving a stack of money, a box of cereal, or simply your time, to be able to make a difference in the life of a child, regardless of your circumstances, is a blessing. The fact that my co-workers who are going to be without jobs in the next

2 weeks were still willing to give is extremely humbling to me.

Brandi Jeter is a Philadelphia mom. This post was adapted from her blog, Mama Knows It All.