The Association for Library Service to Children, a division of the American Library Association, has announced the 2016 winners of the John Newbery Medal, the Randolph Caldecott Medal, the Robert F. Sibert Informational Book Medal and the Coretta Scott King Award, among many other honors. This year's choices reflect an appreciation of diversity in children's literature. 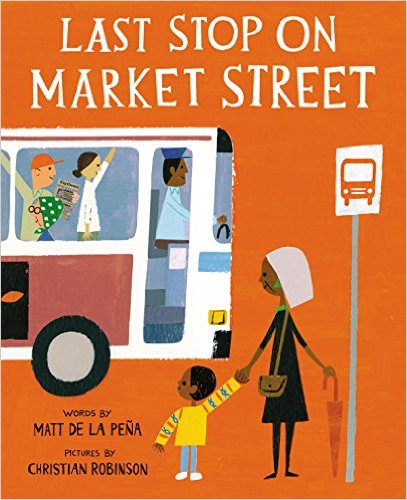 The Newbery Medal, which honors the year's "most outstanding contribution to children's literature," went to Last Stop on Market Street by Matt de la Peña (Penguin Random House, $16.99). This picture book chronicles a boy's reflections about his family's poverty (why doesn't their family own a car?) during a bus ride to a soup kitchen with his grandmother and his grandmother's responses that help him see the beauty in their lives. The book also won a Caldecott Honor for the illustrations by Christian Robinson.

The Randolph Caldecott Medal for the most distinguished picture book was award to Finding Winnie: The True Story of the World's Most Famous Bear (Little, Brown, $18), illustrated by Sophie Blackall. The book tells the story of a real bear from the London Zoo who was the inspiration for the character A.A. Milne's character Winnie the Pooh. 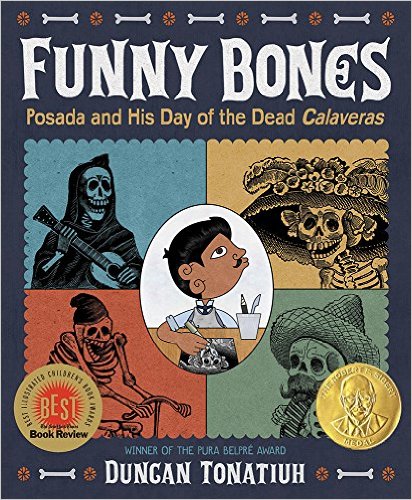 The Robert F. Sibert Award for the best nonfiction book for children went to Funny Bones: Posada and His Day of the Dead Calaveras (Abrams, $18.95), written and illustrated by Duncan Tonatiuh. Tonatiuh tells the story of Mexican artist and cartoonist José Guadalupe Posada, who used his art as a form of political activism. 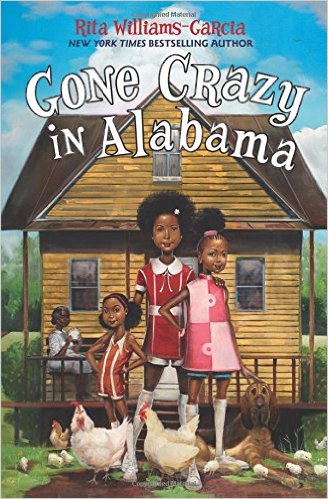 The winner of the Coretta Scott King award, which recognizes an African American author and illustrator of children's and YA books, went to Gone Crazy in Alabama (Amistad, $17.89) by Rita Williams-Garcia. The story of the Gaither sisters, who travel from Brooklyn, NY, to rural Alabama to visit their grandmother is the final book in the trilogy that includes One Crazy Summer and P.S. Be Eleven. 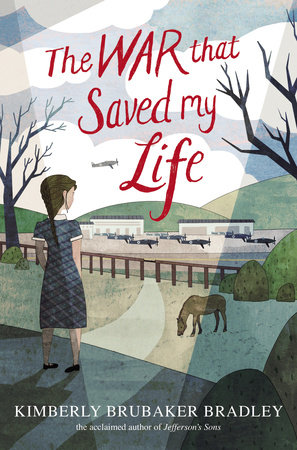 The War that Saved My Life by Kimberly Brubaker Bradley (Dial Books for Young Readers, $16.99) is set during World War II and finds 9-year-old protagonist Ada yearning to escape her one-room apartment. Ada has a physical disability, and her cruel mother keeps her hidden from society out of embarrassment, until Ada secretly follows her brother Jamie when he is shipped out of London to avoid the war. The Wall Street Journal calls the book "achingly lovely, nuanced and emotional acute" and placed it on their list of Best Children's Books of 2015. 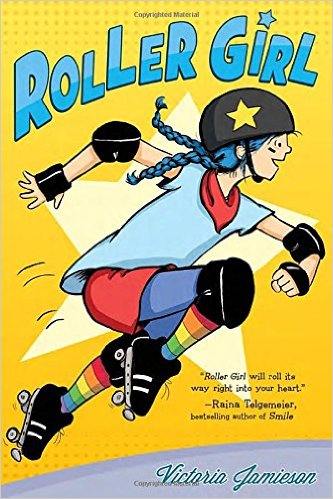 Roller Girl by Victoria Jamieson (Dial Books for Young Readers, $20.99) is a graphic novel that tells the story of 12-year-old Astrid, who gets involved with roller derby and finds that the sport demands much from her physically and emotionally. The book has already enjoyed the status of a New York Times Bestseller, and the NYT Book Review remarked of it, "This spiky, winning graphic novel captures the bittersweetness of finding a new passion and saying goodbye to your former, more uncertain self." 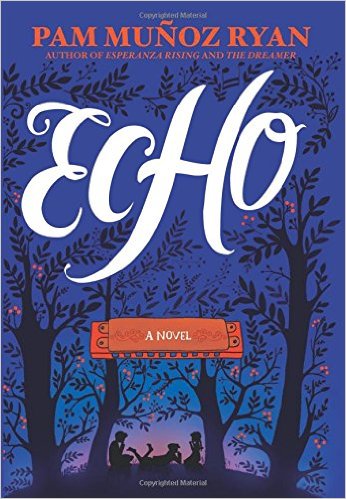 In Echo by Pam Muñoz Ryan (Scholastic, $13.99), a boy named Otto is lost in the Black Forest and emerges with the spirits of three sisters imprisoned in a harmonica. The story then leaps to the 20th century and interweaves the lives of three more children with the  harmonica: Friedrich, a disfigured outcast; Mike, an orphan; and Ivy, the daughter of an itinerant farmer. According to the School Library Journal, "Each recognizes something unusual about the instrument, not only its sound but its power to fill them with courage and hope. Friedrich, Mike, and Ivy are brought together by music and destiny in an emotionally triumphant conclusion at New York's Carnegie Hall. Meticulous historical detail and masterful storytelling frame the larger history, while the story of Otto and the cursed sisters honor timeless and traditional folktales." 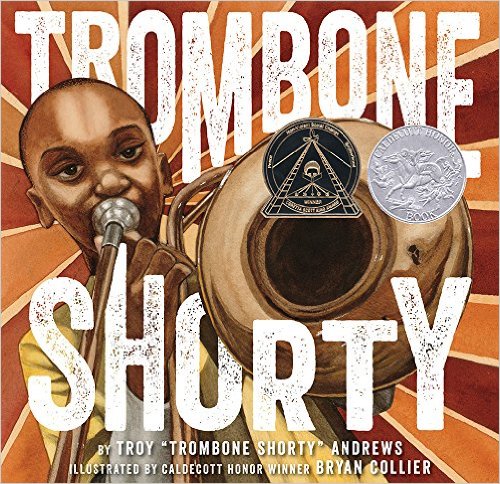 In Trombone Shorty (Abrams, $17.95), illustrated by Bryan Collier, musician and author Troy Andrews relates the story of his upbringing in the Tremé section of New Orleans. He started playing the trombone when he was shorter than the instrument, which earned him his nickname. This lively picture book celebrates not only a Grammy-winning artist but the culture and music of New Orleans. 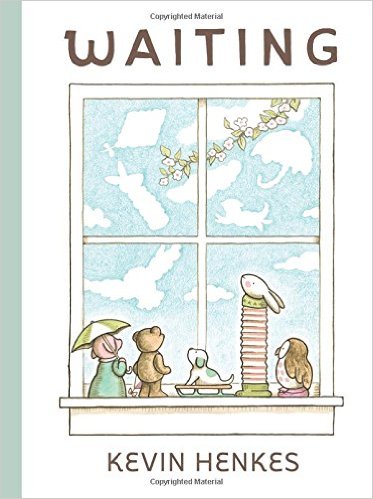 Waiting (Greenwillow, $18.89), illustrated and written by Kevin Henkes, tells the story of a group of stuffed animals waiting on a windowsill for something exciting to happen. Owl is waiting for the moon. Pig is waiting for the rain. Bear is waiting for the wind. Puppy is waiting for the snow. Rabbit just likes to wait! Their contentment with waiting may be contagious to young readers who are faced with plenty of life situations in which patience is important. 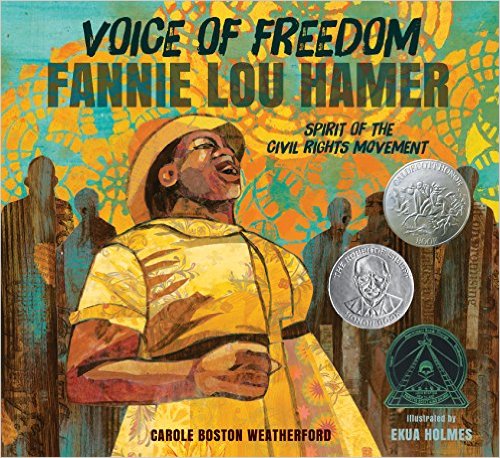 Voice of Freedom: Fannie Lou Hamer, Spirit of the Civil Rights Movement (Candlewick, $17.99), illustrated by Ekua Holmes and written by Carole Boston Weatherford, blends poetry and collage illustrations to tell the story of Hamer's role in the fight for racial equality. Kirkus Reviews calls the book "a welcome addition to civil rights literature for children."